The McLaren MP4/8 was a Formula One racing car which competed in the 1993 season. It raced in all sixteen Grands Prix, scoring five wins. The engine was a Ford HB 3.5 V8. The car was designed by Neil Oatley around advanced racecar technology, including a semi-automatic transmission, active suspension and traction control systems.

Honda had supplied McLaren with engines from 1988–92, the first four years where the team had dominated the drivers' and constructors' championships. However, Honda departed F1 after 1992 and team principal Ron Dennis was unable to get a supply of Renault engines as a replacement.

McLaren had to make do with the Ford HB 3.5 V8 engine, which had inferior power compared to the Renault engine found in their chief rival Williams, and even the higher spec Ford engine fitted in the Benetton that season. Because Benetton had a pre-existing contract as the Ford factory team, McLaren had to settle for a customer engine which lacked some of the technological advancements of Benetton's factory engine. During the season, McLaren improved their car with technology from TAG Electronics.Initially, Ayrton Senna was so unconvinced by the car and the engine that he demanded a race-by-race contract at $1 million per Grand Prix, though others suggested that this was a marketing ploy between Senna and Ron Dennis to keep sponsors on edge and interested.

However, the MP4/8 was competitive enough to achieve some remarkable successes. Even though rival Alain Prost was in the superior Williams FW15C, Senna's skill enabled him to lead the championship during the first weeks of the season. The MP4/8 was known for having a considerably shorter wheelbase (length) than the FW15C and was a noticeably smaller car in length than Prost's Williams. Later in the season, the Frenchman asserted the dominance of his Williams to take the lead for good, while Senna fell off pace during the second half of the schedule and dropped to third place. While Prost clinched the championship with two races to spare, Senna went on to win the last two races. The Brazilian had five wins in total, including one of his greatest drives in the 1993 European Grand Prix, and finished second in the drivers' championship to Alain Prost, whilst McLaren finished runners up to Williams in the manufacturers' championship.The car scored 84 points during the season, 73 of which came from Senna, for an average of 2.63 per start. The other drivers of the MP4/8 were Michael Andretti, a recent American CART champion, and Mika Häkkinen. While Senna took the championship battle to the last few rounds, Andretti had only a few points scoring finishes, including one podium. Some factors were outside his control; for instance he never tested a Formula 1 car in the wet and a string of collisions meant that he only completed three laps in his first three races. Andretti also never came to grips with highly technical aspects such as active suspension and traction control, two "gizmos" not found in the simpler CART. Lastly, Andretti continued to reside in the United States, commuting to F1 races and test sessions. By mutual agreement, Andretti was released from his contract after his scored his only podium for the team.

At the next round, in Estoril, the experienced test driver Mika Häkkinen went on to outqualify his triple world champion team-mate and was in a competitive position in the race, duelling with Jean Alesi's Ferrari. Häkkinen however, ran too close to the Ferrari at the 5th gear final corner, losing downforce and understeering onto the grass, and into the wall. For the remainder of the season he went on to score one podium, and another retirement from a competitive position.During 1993 the McLaren team built a modified version of the MP4/8 to be used as a test car for the Lamborghini V12 engine. After a handshake deal between Ron Dennis and Bob Lutz of Chrysler (who at the time owned Lamborgini), the modified car carried the V12 engine that was also supplied at the time to the Larrousse team. Ayrton Senna and Mika Häkkinen tested the car with testing completed at both Estoril and Silverstone. The modified MP4/8 took three months to re-engineer and stretch to fit the longer and heavier V12. After first driving the car Senna suggested to the engine builder Mauro Forghieri that it would be better with a less brutal top end and a much fatter mid-range. The changes were made and while the engine lost 25 hp up top, it gained 60 hp all round, making the modified MP4/8 more drivable and much faster than before and even faster than the race version. The combination of the MP4/8 and the Lamborghini V12 also proved more stable and easier on tyres than the Ford powered race car. Senna and Häkkinen were reportedly very impressed with the car/engine combination, despite the engine's poor reliability record. Senna was so impressed that he wanted to use the McLaren Lamborghini combination for the last few races of 1993. He believed that regardless of reliability, his car would at least be as fast or even faster than both Williams and Benetton who he was struggling to keep up with in races using the customer spec Ford V8. History shows that this of course never happened as plans were by then already in motion for McLaren to use the Peugeot A6 V10 in 1994. The MP4/9 Peugeot engined car which followed was closely based on its predecessor but was not as successful. 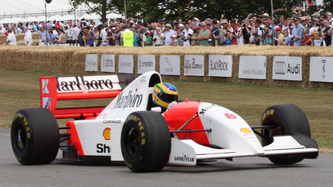 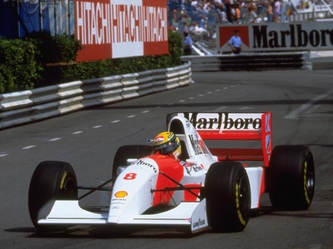 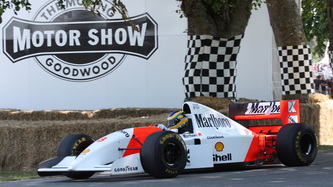