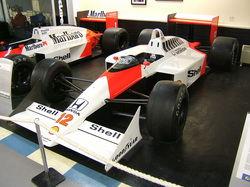 The McLaren MP4/4 was a highly successful Formula 1 car that competed in the 1988 Formula One season. It was designed by  Gordon Murray, who based the design on his lowline Brabham BT55 car of 1986, and American engineer Steve Nichols. It is one of the most dominant Formula One cars ever built, winning all but one race in the 1988 season.
After a relatively disappointing 1987, when McLaren-TAG Porsche lost out nine times to the dominant Honda-powered Williams, twice to Lotus and twice in the latter stages to Ferrari, taking only three wins, McLaren secured the 1500cc V6 Honda turbo engines, the most powerful in F1 at the time. With the engines coming at the expense of Williams, a strong 1988 was possible. 1988 was due to be the last year for the turbo engines before they were banned, so most teams were making a concerted effort to establish themselves with naturally-aspirated cars. Murray went ahead with the design of the car on a purely turbo engined basis, which put the team at a distinct advantage over their rivals.

The lowline chassis layout was pioneered when Murray was at Brabham. The idea being that a low car would be more aerodynamically efficient and allow more air to pass over the rear wing causing more downforce to be produced, but without excessive drag. In theory this sounded great. In practice the BMW engine used in the Brabham proved troublesome in this layout with fuel starvation problems and engine installation issues plaguing the BT55. However the Honda unit was much smaller and had a lower centre of gravity than its BMW counterpart, so it was ideal for the low-down chassis layout. With this in mind, Murray revised his design and went ahead with his plan.he situation improved immensely when Ayrton Senna signed to partner Alain Prost (at Prost's suggestion) on a 3 year contract. The McLaren chassis, the Senna and Prost pairing, and finally the new powerplants, looked like a formidable combination. However, there were concerns after the FIA introduced a fuel regulation for the turbo powered cars of 150 litres for a race distance. Honda's engine management team worked feverishly on the fuel consumption of the engine, trying to improve it in order to avoid embarrassing late race retirements. The team also experimented with active suspension in early testing but this was abandoned, and the car appeared 'as-is' through the season, save for a few aerodynamic revisions. The car appeared at the first race with very little testing, but that didn't stop Senna putting the car on pole position by a long way.

Before 1988, the most dominant car seen in F1 had been the Lotus 79, however the MP4/4's successes made the Lotus seem almost ordinary. The season was an almost embarrassing walkover for McLaren, who took 15 victories from 16 races, including 10 1-2 finishes and Prost finishing 1st or 2nd in every race other than his 2 retirements in Britain and Italy. The dominant run was only interrupted once, at Monza, when Senna had an accident while lapping Jean-Louis Schlesser making a one-off appearance for Williams. With Prost already out after a rare engine failure, Gerhard Berger of Ferrari took an unexpected victory. Perhaps the most telling example of the MP4/4's emphatic domination was seen at Monaco that year. Senna qualified an astonishing 1.5 seconds faster than Prost using the same car, while Prost was again a second ahead of the rest of the field. The car retired only 4 times in the season- with Prost retiring at Silverstone and Monza, and Senna's infamous accidents at Monaco and Monza. Another example of McLaren's domination was at Imola where Senna and Prost both qualified over 2.5 seconds faster than 3rd placed Nelson Piquet in his Lotus with the same Honda twin-turbo V6 that the McLarens had.

Alain Prost driving the MP4/4 at the 1988 Canadian GP.At the end of the season, McLaren had taken both the Constructors' and Drivers' titles (Senna edging out Prost by default - only the eleven best results counted but Prost scored more points with fewer wins). The MP4/4 took 15 wins from 16 races, 15 pole positions, and 199 points, all in a single season with the 9-point scoring system established in 1956. It would be followed by the McLaren MP4/5 in 1989.

Current McLaren Formula One driver Lewis Hamilton drove the MP4/4 on Top Gear. After driving the car, Hamilton said to host Jeremy Clarkson "I love this car. It's one of the best days of my life. I finally can check off my dream of driving this car." 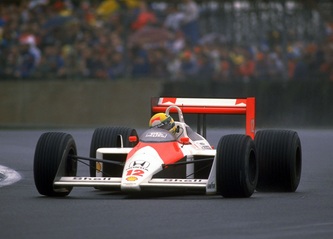 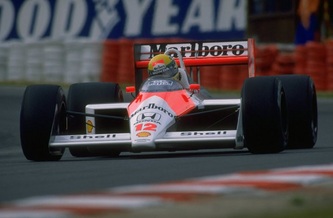 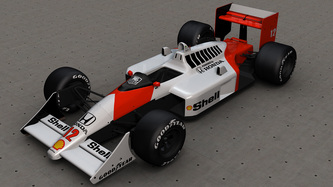