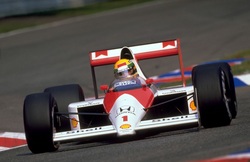 The McLaren MP4/5 and its derived sister model the McLaren MP4/5B were Formula One racing cars designed by Neil Oatley under the supervision of Steve Nichols. The MP4/5 was loosely based on its predecessor, the all conquering McLaren MP4/4. McLaren used the new car for the 1989 season, and the MP4/5B for 1990, earning back to back drivers' and constructors' world titles with the type.

Over the course of two seasons, the MP4/5 took 16 wins, 27 pole positions and 263 points before it was replaced by the McLaren MP4/6 for 1991.
1989 was the first year where naturally aspirated engines were compulsory for all teams after the banning of the turbocharged units at the end of the previous season. To this end, Honda built a 3.5 litre V10 engine, developed throughout most of the latter half of 1988. The MP4/5 was unveiled for pre-season testing and it was instantly on the pace, as well as reliable. Developed by Neil Oatley, the MP4/5 looked like the car to beat in the new season. While the Ferrari that season was a fast all around car particularly in the hands of Nigel Mansell, it was also chronically unreliable due to its new semi-electronic gearbox shift, giving further advantage to McLaren.

McLaren took 10 victories during the season, 6 for Ayrton Senna and 4 for Prost. This was at a time when the relationship between the two men was at breaking point, so their rivalry pushed the development of the car far ahead of the other teams as they tried to out-do each other. Although Senna won six races to Prost's four and usually finished ahead of the Frenchman in the races, accidents and car breakages meant that he had four fewer points-scoring finishes and finished 16 points behind his French rival in the championship. Senna and Prost's combined points total meant McLaren easily won a second straight constructors' championship.
Prost went on to move to Ferrari for the 1990 season, as announced during the midseason of the previous year. The Frenchman was unhappy because he believed that McLaren was favouring Senna. Prost took technical director Steve Nichols with him to Ferrari.

As a result, Ferrari and McLaren swapped car numbers, giving Prost and team-mate Nigel Mansell the numbers 1 and 2, and giving Senna and Gerhard Berger, who had swapped with Prost at Ferrari, the numbers 27 and 28.

McLaren responded the following year with a modified version of the MP4/5. The wings were redesigned and the rear bodywork reprofiled around larger radiators. The engine was tweaked and Senna did much development work to ensure he would have better reliability in the new season. He and Gerhard Berger took the fight to Prost and Ferrari in 1990, winning another six races and winning the constructors' championship. The McLaren proved to have an outright speed advantage in qualifying and was notable for the number of times both cars were on the front row. The car appeared to struggle slightly against the Ferrari 641s in the race, particularly on heavy fuel loads with the Ferraris' race pace almost negating the McLarens' qualifying supremacy.

It was in that year's Japanese Grand Prix that Senna took his revenge for the previous season, when he rammed Prost from behind at 160 mph at the first corner of the first lap, winning himself the drivers' championship. 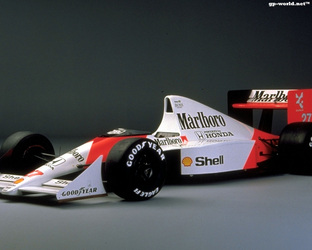 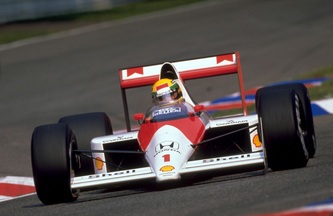 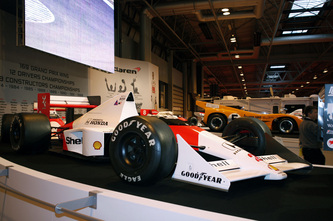