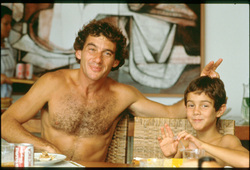 Senna was a practicing Catholic. A very religious man, he openly conflated his beliefs with racing, something for which he was criticized by Alain Prost, among others. He often read the Bible on long flights from São Paulo to Europe. In the Senna movie released in 2010, Ayrton's sister, Vivianne, reveals that during the initial tragic event of the San Marino Grand Prix of 1994, Senna had sought strength from the Bible to continue racing, opening a page that promised him the greatest gift of all—being with God.

As his profile rose,Senna expressed concern over the widespread poverty in Brazil. After his death it was discovered that he had quietly donated millions of his personal fortune to aid poor children. Shortly before his death, he created the framework for an organisation dedicated to Brazilian children, which later became Instituto Ayrton Senna.

Senna was often quoted using driving as a means for self-discovery and racing as a metaphor for life: "The harder I push, the more I find within myself. I am always looking for the next step, a different world to go into, areas where I have not been before. It's lonely driving a Grand Prix car, but very absorbing. I have experienced new sensations and I want more. That is my excitement, my motivation."

Towards the end of his career Senna became increasingly preoccupied with the dangers of his profession. On the morning of his death he initiated the re-formation of the GPDA safety organisation, with which he had intended to work to improve the safety of his sport.

He was renowned for his close relationship with Gerhard Berger, and the two were always playing practical jokes on each other. Berger is quoted as saying "He taught me a lot about our sport, I taught him to laugh." In the documentary film The Right to Win made in 2004 as a tribute to Senna, Frank Williams notably recalls that as good a driver as Senna was, ultimately "he was an even greater man outside of the car than he was in it."

Senna was married once for a short period of time, prior to his breakthrough in Formula One, to Lilian de Vasconcelos. After his marriage to Vasconcelos ended, Senna courted Adriane Yamin, daughter of an entrepreneur from São Paulo. She was 15 years old when they began the relationship in 1985 and was commonly chaperoned by her mother during meetings with Senna. They were briefly engaged, but the relationship was broken off in late 1988.

By the time of his death, Senna was dating Brazilian model Adriane Galisteu, with whom the Senna family never had a friendly relationship, even to this date. That was shown in Senna's funeral, where Galisteu was openly cast aside. The "widow" status was given by the family and media to Brazilian icon Xuxa, whom he had dated for several years in the early nineties and who arrived at the funeral holding hands with Senna's sister Viviane. After his death Galisteu wrote a book about her relationship with Senna. She became a celebrity upon Senna's death, many saying because of it, and has kept that status ever since, working as a TV show host. He was the uncle of Formula One driver Bruno Senna, of whom he famously said in 1993: "If you think I'm fast, just wait until you see my nephew Bruno".

Ayrton enjoyed physical activity ranging from athletics to water jet skiing. He also had a wide range of hobbies, such as flying real and model planes and helicopters, fishing and riding his favourite Ducati motorbikes. 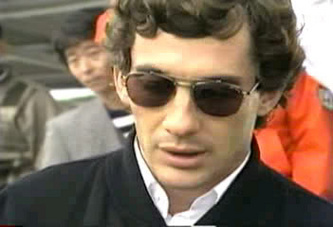 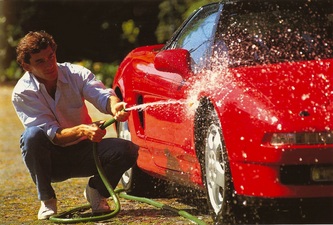 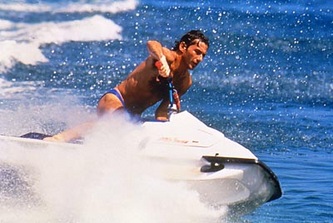