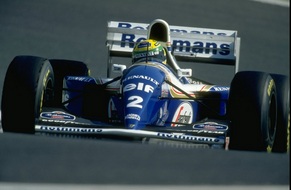 The Williams FW16 was a Formula One car used by the Williams team for the 1994 Formula One season. It was designed by Adrian Newey with the major regulation changes that the FIA had introduced in the off-season, banning the electronic devices that had been used by the front running cars during the preceding two seasons.

The FW16 was a passive evolution of the FW15C that had preceded it. It featured revised bodywork, with a low profile engine cover and enclosed driveshaft and an anhedral rear wing lower element, the latter being hinted at in the preceding FW15C. In addition to these changes it featured an innovative rear suspension wishbone design and an improved version of the Renault Sport Formula One engine (RS6). In addition it featured a fuel valve to enable the ability for mid race refuelling.

The number 0 car was driven by Damon Hill for the entire season. The number 2 car was driven by Ayrton Senna, David Coulthard and Nigel Mansell. The car proved to be a tricky proposition in early testing and in the early part of the season. A design flaw was discovered in the car's frontal section before the third race of the season, which was attempted to be remedied for the 1994 San Marino Grand Prix. Various other alterations were made to alleviate the cars handling problems by Adrian Newey and Patrick Head. Ultimately the FW16 would be known as the car Ayrton Senna was fatally injured in whilst in the lead of the San Marino Grand Prix.

Williams later introduced a B-spec car, featuring the compulsory open airbox rear and featuring shorter sidepods that the FW16. This car was developed by Hill, but the Benetton B194 and Michael Schumacher were dominant in the first half of the season. Rookie test driver David Coulthard shared the second car with former champion Nigel Mansell (who also had IndyCar commitments). The engine was a Renault RS6 3.5 V10. Their main sponsor was Rothmans, replacing Camel Cigarettes and Canon used on the FW14 and FW15C.
The car was shown to have severe shortcomings at its debut. The FW16 lacked the active suspension and traction control of the previous season's FW15C, and suffered from a very narrow driveability setup window that made it difficult to drive until the modifications to become the FW16B. This can be seen when Senna, pushing to close the gap between himself and Schumacher, spun out of second place during the Brazilian Grand Prix, and by the identical spins in practice by Hill and Senna at Aida, with Senna commenting on the Aida practice spin: "I can't explain it. I was actually in one of my best positions at that corner when it went. It looked silly and stupid but better it happens today than tomorrow."

Senna commented as follows on the FW16 during early season testing:

"I have a very negative feeling about driving the car and driving it on the limit and so on. Therefore I didn't have a single run or a single lap that I felt comfortable or reasonably confident."

"I am uncomfortable in the car, it all feels wrong. We changed the seat and the wheel, but even so I was already asking for more room." "Going back to when we raced at Estoril last September (on testing the passive Williams at the same track 4 months later), it feels much more difficult. Some of that is down to the lack of electronic change. Also, the car has its own characteristics which I'm not fully confident in yet. It makes you a lot more tense and that stresses you."

Patrick Head, subsequently removed a section of the chassis to give Senna more space. However the new passive Williams FW16 had its shortcomings. The car was springy and unstable, with aerodynamic deficiencies which the revolutionary rear suspension could not mask.

Even after the initial Imola modifications mentioned earlier, the car maintained its tendency of dynamically changing its handling balance (understeer/oversteer) for any given setup. A short account of a driver briefing which Ayrton Senna gave to Adrian Newey and David Brown at Imola describing this exact characteristic can be seen in the 2010 Senna movie by Universal Pictures. Notably, in this exchange Senna describes the car as being "worse" than before.

It is also alleged that in a personal conversation about the FW16 between Prost and Senna in early 1994 Prost had admitted that the FW15C had not consistently been as easy to drive as others had assumed in '93, exhibiting odd behaviour at times. Being more nervous than the preceding FW14B when driven at the limit this manifested itself in slight rear-end instability under braking, most notable on high speed circuits when the car was operating in a low downforce trim, attributed to small changes in weight distribution from the year before. Other reasons given were that the FW15C, and by extension the FW16, were simply an evolution of the FW14B, which had been designed to suit the driving style of Nigel Mansell. The major aerodynamic difference between the three cars being the anhedral rear wing and downward sloping rear bodywork of the FW16.

Adrian Newey, designer of the FW16 commented as follows:

"To be honest we made a bloody awful cock-up. The rear-end grip problem was purely a setup problem. We were learning about springs and dampers all over again after concentrating on active suspension for two years, whereas most people had been away for just one. We also had a rather silly aerodynamic problem - basically the front wing was too low - but that was raised for Imola, by which time we were looking in pretty good shape" 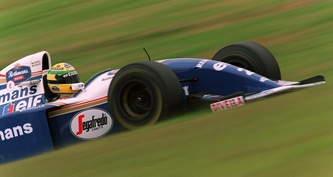 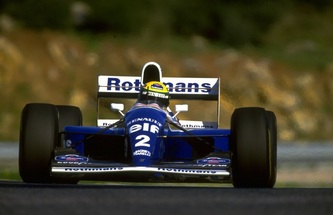 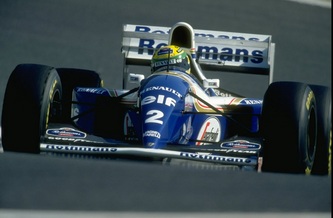